Yay we finally got new couches. they are so comfy! They look great too. We are still waiting for the second one but the first one is here. The one that is here is in the T.V. room. The next is supposed to come on tuesday, Feburay 11 2013. We have NOT have couches for a few months, since we sold our other ones last october. It has been torture!!! We did have my grandma couch for awhile, but then she took them to her aparment. they are a lot bigger then our others ones, much more plush too. Another awesome thing is that the first one is an automatic lift out. So the foot rest comes out automatically  There is also one of those long ones that you can lay on. Then there is another chair, a connector, and then another chair and then a consol. It is very deep and can hold a lot of stuff. It also has two cup holders. The second big chair can lean back but it isn’t automatic. The big long one can lean back too.
That one is my favorite. 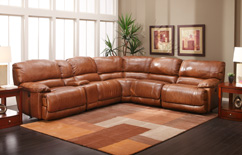 Each of our bigger chairs can fit 2-3 people and the long one can fit two, then the connector can fit to too. (ha ha) about 9 people maximum can sit on it maybe 10 or 11 with kids. You will never believe what ginger did to the couch. She actually scratched it and left a mark. It made my mom really mad and she was banned from the house for a few days, and still isn’t allowed in the room with the couches. Well that really it with couches right now. Hope to see you all soon. 🙂 Mya