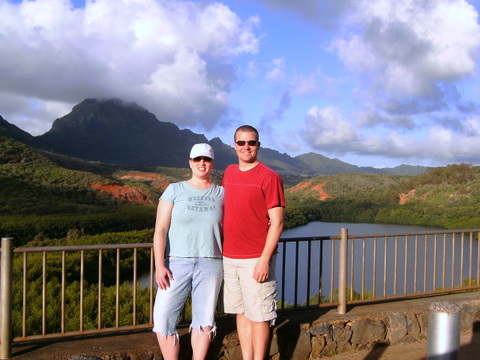 Can I say anymore? There is a saying in kauai, “If you had a great time in Kauai, tell your friends you went to Maui”. Kauai is such a gorgeous place with so many great beaches and awesome hidden away utopias. However, Kauai is not as touristy as Oahu or Maui. We had such a great time. We experienced a lot, yet it was so leisurely. There were breathtaking views at every turn and the ocean was a clear blue and turquoise. Most of the vegetation there was introduced to the island, but most of it was for medicinal or food purposes. All of it is beautiful. The Hawaiian islands are so rich with history; we loved learning more about it and becoming connected with the people there. One other thing that was a bit odd at first and then just became normal was that there were chickens and roosters everywhere. The hurricane in 1992 released them and they just keep reproducing. There is no predator for them and frankly, I thought it was kind of cool. Although, we still didn’t want any roosters right by us.

We flew all day Monday and were gifted with four hours time, so we got plenty of rest that night. It was much needed for what we had in store on Tuesday. We went on a Kayak/hike/swim excursion. There is a huge crater in the middle of the island where several rivers come down and flow into the ocean. We kayaked up to Kipu Falls which is, of course, upriver, but we had the wind at our backs. That was so fun. The group we were with was very diverse; from a family with young teenagers to single guys(a little obnoxious) to couples of various ethnic backgrounds (ie: quite a few from California :>) There were huge mangrove trees at either side that have actually taken over and cut the width of the river in half. They were still pretty cool. Another plant had a flower that bloomed white in the morning, turned yellow in the afternoon and a deep orange in the evening. Then it would fall off and the process would start over again the next day.

It was a privilege to see the bank of the river by a rope swing where Indiana Jones himself turned and whipped the gun out of the hand of his cowardly comrade. Then only to turn and be swept into 1960 Korea and see the mountain where the M.A.S.H. medical team helicopter landed with wounded soldiers due to battle. Raiders of the Lost Ark and the M.A.S.H. series are a couple of my favorite shows (thanks to my dad), so it was pretty cool to see where those scenes were filmed. After about two miles upriver we banked, put on sunscreen and began hiking. We had some cool tour guides. Lauren was pretty cool, she had done so much in her life and was only in her early twenties. She was funny and knowledgable. We were a bunch of lame tourists, but it was great. We hiked and learned about the vegetation and then came upon a water hole and took turns on a rope swing. Needless to say, Mike did a Kamakazee, followed by plugging his nose and I hurt my pinky; it was fun.

We hiked further on and came up to an open prairie with a tractor pulled trailer where we sat and enjoyed a ride. We saw, of course, some roosters as well as pigs and peacocks. Kind of a weird mix, but it didn’t compare to the huge, loud and and salivating dinosaurs! Well, we imagined those right in the spot where Jurassic Park was filmed when they ran from the herd and jumped behind the log barely escaping them. We drove in a tunnel of huge evergreens called Norfolk Pines. It was very impressive. Sailors would use the bark and branches for their masts and sails. We came to a cool spot back in the forest and we ziplined across a river! We ate lunch there and went for a fantastic ride. It was a blast-I deleted a very bad picture of myself right before I jumped. Sorry, but although you would bust up laughing at me, I looked like a dork. Don’t worry, there are a few more pictures.

We then went down to the best hidden waterfall ever. There was a rope swing enabling a person to swing up forty feet high before plummeting into seemingly bottomless water hole. You could also jump from the waterfall cliffs (about 25 feet high). Mike did the rope swing a few times. Two of the swings were beautiful with a good landing, however, one swing started out all wrong with him yelping, flipping and receiving that instant sunburn only still water can offer. I jumped from the cliffs once. Climbing the ladder to get up there was nerve racking enough for me. It was fun and the water felt great. Some of the local boys would climb out onto wobbly branches and somersault with a half gaynor and a twist. It was incredible.

After wrapping up at the Kipu Falls swimming hole we headed back to the wagon and then did a mile hike back to the river where we were picked up by a motorized catamaran that ferried us back to our starting point. (going down stream in a kayak would be too hard because the wind blows upstream)

We headed back to our hotel, cleaned up and ate dinner at a famous place in Wailua called the Bull Shed! We shared a huge portion of prime rib that was awesome! The restraunt was right on the shoreline so we watched the ocean and enjoyed a relaxing evening together before heading to bed.